“I have the best cello in the world.”

“Cool, thanks Anne, couldn’t have done it without the Sunflower Violin.”

“Adrienne had a solo on American Idol on Tuesday, so the Dragon Cello was in the limelight.”

“She is magnificent. More amazing than any picture I had in my head. I’ve had musical Stendahal moments, but never with visual art—that is, until opening these photos of La Sirena. I can’t wait to play her as a cello.” 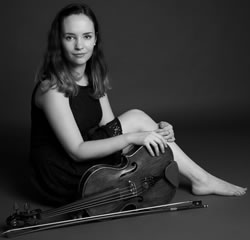 Shannon Elliott, violist
Excerpts from a Recital at the Manhattan School

Cadenza for Viola solo by Krzysztof Penderecki, performed by Sarah Wilkinson on the Avanti viola

Watch Ann Guinee play “La Companella”by Paganini as part of her junior recital at the Cleveland Institute of Music.

Sarah Wilkinson, seventeen-year-old violist, gives her debut performance of "Elegy" by Faure with the Albuquerque Youth Symphony on a 16 and 1/2 inch viola which I made to suit her physique and personality. 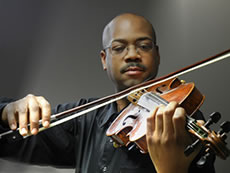 Clyde McKaney began studying violin while a student in the Jackson Public School system. In 1981, while a high school student, he joined the Jackson Symphony Orchestra. He went on to study music at the University of Michigan, Michigan State University and, as a participant in the Alfred Chamber Music Institute, he studied with Joseph Fuchs of the Juilliard School. Clyde lives in Jackson where he is a JSOCMS faculty member, principal violist in the JSO, and conducts the JSO Community String Ensemble

Adrienne Woods Buffing the Gut with her Personal "Dragon."

Adrienne Woods plays the "Dragon" cello in recital with her pianist father.

Based in Austin, the chamber music group Revel is redefining classical music for the masses. Informal performances in non-traditional venues are their specialty, all delivered without the pomp or pretension that scare so many of us away from classical music. Instead of sitting quietly and listening, Revel wants the audience to interact with the performance; to talk with the musicians and ask questions about the piece.


The classical band, Revel, in a performance of Piazzolla's “Otoño Porteño” with Joel Becktell on the Crane cello.