PART I: OUT OF THE WOODS
Follow Anne as she traveled to Oregon in search of the special wood used in the creation of fine stringed instruments.

In my new experience as a wood-cutter, I found myself in the Pacific Northwest in Oregon deep in the beautiful mountains which surround Medford. Even though I had never been on a wood gathering trip in my life, I could feel it and literally smell it in the air: this place grows trees, and trees like you couldn't believe until you saw them. Oregon is such a tree-friendly place that all the maple trees I found were left-overs. Even when a forest had been clear-cut, old prizes were left for an instrument maker such as myself. And as I pondered cutting down my first tree, I stood in young trees springing up all around; youngsters maybe thirty years old some of which would grow into violins of the future made by makers not yet born. 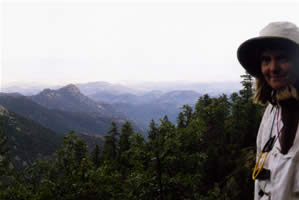 Anne prepares to scout the forest for trees that are suitable as violin wood. 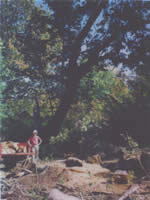 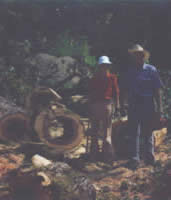 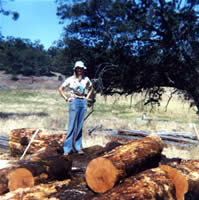 The leaning big maple in the background of the picture on the left was found and pronounced by Victor a "trash tree" overlooked as worthless by loggers.

This Oregon Big Leaf maple - rotten at the core but surrounded by a six inch perimeter of beautifully flamed solid wood has since then given me many fine instruments. The wood, cut on the slab by neccesity as one would peel a potato, had a bubbly look- distinctive.

Then, back at 2444 Gardener Road, Eagle Point, Oregon I sort through some more logs we cut that fall in 1982. 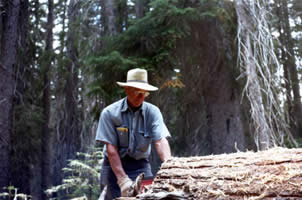 Victor Gardener using a six foot chain saw on an old growth spruce. We paid the Forest Service $7.50 per tree in 1982. Victor lent his knowledge and skill as a violin maker and logger. He recently passed away (2006) at the age of 97. I know he is still out there somewhere still chuckling at someone, me, he called his "college idiot". And I shall smile back from time to time thanking him for passing on just a bit of that old fashioned knowledge that can only be got by showing and doing. On the right Victor presents on end his tour-de-force quarter-cut chain sawing. Each section will become a cello top in due course. 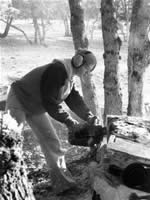 I used the 'lil Cub chainsaw and ear muffs after the first the first day when I continued to hear chain saws buzzing in my head all night. At night beds were made out of the chain saw shreds. Until the wood could be hauled out of the forest, we had to spend the night guarding it so that some enterprising person would not mistake it for free firewood. 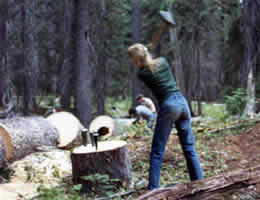 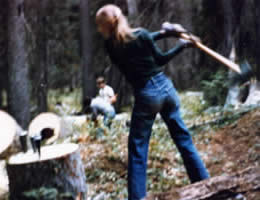 Anne splitting wood with a 20 pound mallet and wedges. In the old days, all violin wood was split as that was the most labour saving method known. Even today some makers will only use split wood as it shows whether or not the grain runs straight. 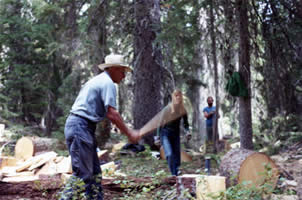 Victor demonstrates how it should be done. 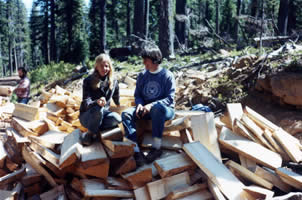 The instrument billets are carried out of the forest to a dirt logging road. Taking a break with Diana Gardener. Notice the giant conifers in the background. Any tree that looks like an over grown Christmas tree has the potential top of a great instrument inside it. 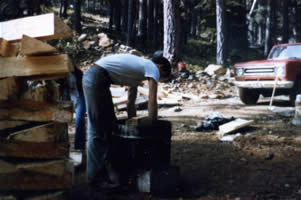 The ends of each piece are dunked in hot wax to prevent cracks as the wood cures. The wood is then stacked in the shade with air spaces and left in place for at least 18 months.

Next: Into the Shop →