The scroll is the part of a violin in which tradition allows the maker the most freedom to be "creative". Anne has always taken full advantage of that freedom in carving flowers, fauna, icons, messages and even various mythical beasts into the heads of her scrolls. 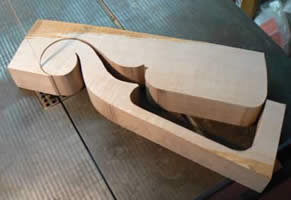 The scroll emerges from the block after being cut out on the bandsaw. 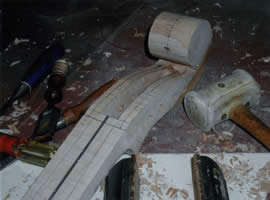 Note the peg holes are drilled, the peg box is carved - and a carbon fiber rod is inserted in the middle of the neck for additional strength to keep the neck angle from sagging or decreasing over the years. Now the carving of the scroll can begin.

The peg box is chiseled out after which the head of the scroll is carved. The neck is then finished and set into a channel cut into the top of the body of the violin.

The scroll is carved from a block of wood which also forms the neck. 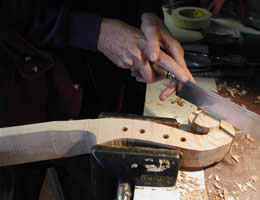 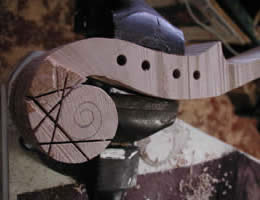 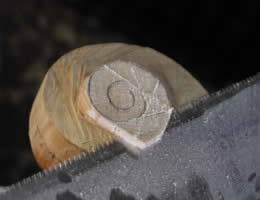 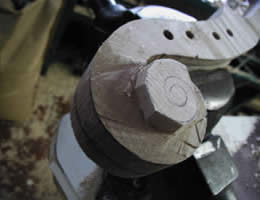 Multiple horizontal and vertical saw cuts are made around the head of the scroll to expose the layers to be carved. 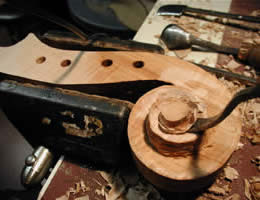 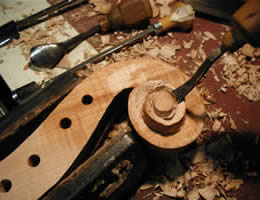 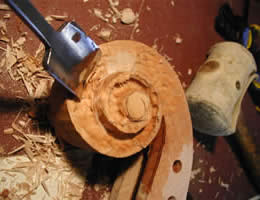 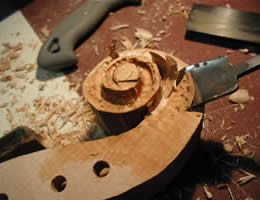 The distinctive and distinguishing qualities of the scroll are brought into being with each cut of the gouge which is used to dish out the layers of the scroll.

I sketch out a theme on the back of the scroll. Gradually, the chisels and knives pictured with the scroll bring the sketch into relief. 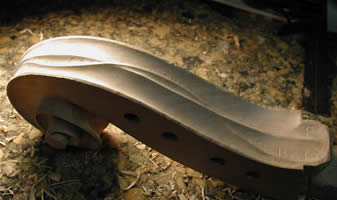 The scroll is finely sanded.

← Back: The Purfling Next: Putting It All Together →